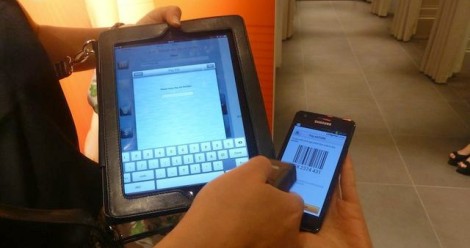 The firm claims its technology does away with the need for the Near Field Communication chips being built into the latest generation of smartphones.

The app, called inStore, is the latest salvo in the early skirmishes of a battle to urn smartphones into the easiest way to pay. It pitches web firms such as PayPal and Google against financial services firms, as well as the mobile manufacturers and operators.

PayPal’s effort, available for Android handsets and the iPhone, allows users to pay using their PayPal account in 230 stores owned by the Aurora Fashions group, which include Coast, Oasis, Warehouse and Karen Millen.

When a shopper wants to make a purchase, they can open the inStore app by entering a PIN. It will generate a barcode that the shop assistant can scan, allowing the store to draw the right amount from the shopper’s PayPal account.

“The lines between the online world and high street will soon disappear altogether: research we carried out last year amongst major retailers suggested that 2016 will be the year you won’t need a wallet to shop on the British high street,” said PayPal UK managing director Cameron McLean. “A phone will be enough.”

Unlike many other attempts to turn smartphones into electronic wallets, PayPal’s app does not rely on NFC. Google, credit card firms and the mobile operators – as well as, it’s rumoured, Apple – are all backing this “wave and pay” technology. It is being built into the latest devices such as the Samsung Galaxy SIII and works in a similar way to London’s Oyster card system.

PayPal claimed its app is better, however, because it does not require retailer to install new equipment.

“PayPal’s ‘pay by mobile’ service works with the phones most of our customers already own. And our retail partner doesn’t have to install new systems to take in-store mobile payments.”

But NFC’s backers have begun a big push of their own on British high street. Barclaycard is currently heavily marketing its “PayTag”, a sticker containing an NFC chip designed to be stuck to the back of a smartphone. It converts current devices, which typically lack built-in NFC capability, into electronic wallets.

Despite widespread predictions of a cashless future, some critics have argued that NFC and other mobile payment systems will hand too much control to banks and big technology firms. Never the less, on Wednesday the Post Office said it will soon become Britain’s largest operator of NFC pay points.